Growth Through Adversity: What we Learned When Our Office Exploded 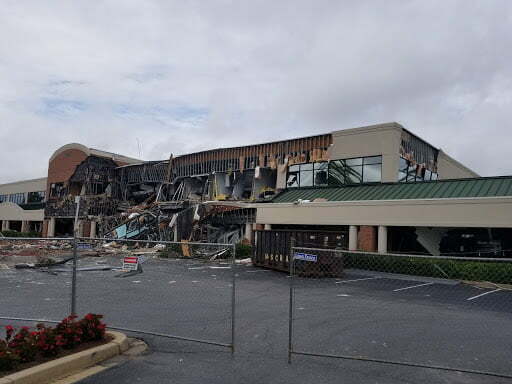 In the south-west Pacific Ocean sits Kavachi, an active undersea volcano named by the islanders for a local sea god. When dormant, Kavachi’s geothermal warmth nurtures an abundant sea life, from starfish to stingrays and sharks. 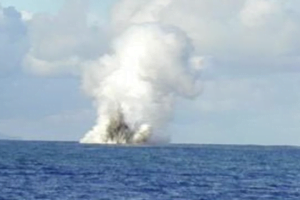 Sea life apparently can detect deadly threats better than us mortals. When an eruption is imminent, the sea creatures sense the coming crescendo of fire, and simply…swim away. They bide their time until Mother Nature settles down, and then they…swim back.

Swimming back from our own eruption

We faced our own eruption here at Skyward Apps last year. On a weekend when no one was in the building, for no apparent reason and with no warning, our office exploded. I was on a bike ride that day at a state park when an employee sent a text saying, “I think something happened to our office,” accompanied by the top photo. Naturally, I immediately lost cell reception and had to frantically peddle 10 miles back to civilization.

The explosion, heard for miles around, took out a giant chunk of the building. Our office just happened to be right above the epicenter. As it was early Sunday morning, fortunately, no one was in the building. While everyone was safe, it felt like a near-death experience. After a moment of panic (maybe a few, to be honest), we took a deep breath and started to take stock of what we’d lost. 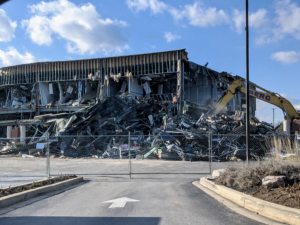 I wish we could take credit for having an amazing disaster recovery plan with all of our processes worked out ahead of time; the truth is we were lucky. Sure, our infrastructure was largely cloud-based, and we did have backups of our internal systems, but we’d rarely tested them. Sometimes it really takes a trial by fire to drive home the criticality of knowing that your restore process is as good as the backup process. Fortunately for us, the vast majority of our systems were recoverable, and amazingly, every single on-premises employee had taken their company laptops home that weekend. From a purely mechanical standpoint, we had recovered and were 90% ready to continue working by the Tuesday of that week. Were there things we lost? Sure. But the core of what we needed was intact, and we could start the process of swimming home. 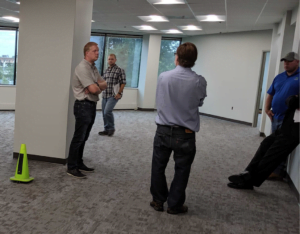 There was an article in Inc. magazine entitled, Adversity is the Fuel of Greatness. It’s a testament to the motivation of our employees and their team-centric attitude that we were able to jump in and function from our disparate environments. We also have the good fortune of working in a business-friendly county with a responsive Economic Development Authority, which immediately jumped in to find temporary office space for displaced tenants.

Over the next few months, we flitted between several temporary offices and instituted a liberal work-from-home policy. Thanks to the collaborative project management tools we were already using and the liberal use of communication tools like Slack, we were far more fluid in our interactions than I would have expected.

The only gap in our arrangement was the ‘water-cooler’ experience. There really is very little that can replace an in-person interaction for the ease of sudden discussions, helpful nudges, or spontaneous eureka moments. We’ve tried permanent video-portals (a little creepy), daily ‘teatime’ get-togethers (great for morale but not so much for spontaneous ideas), and scheduled peer-programming sessions (educational, but again, a little regimented).

The critical hurdle wasn’t solved so much by adding a process or a tool, but by reframing our thinking. looking at it from a psychological approach. In 2019, at least, video conferences were mentally perceived as meetings, and no one likes more meetings. So, there was a certain inertia, a resistance to simply firing up a video call and chatting face-to-digital-face with someone who could maybe help, point you in the right direction or just act as a wall to bounce ideas against.

Terminology helped: “video chat” rather than “video conference”, for example. But really, the key was just getting everyone to try it to de-stigmatize it. We encouraged everyone to tackle things with a video chat-first perspective. Got an unsolvable problem? Take five minutes for an impromptu call. Gradually, we recovered a lot of that spark. We were fortunate that even in those times we had a physical space, albeit a sparse intermediate one, so we could get small groups together to talk through a problem or interact on a whiteboard.

The moral of this story

Eventually, we found a new permanent space to live. 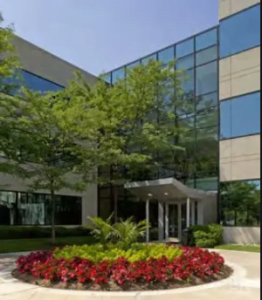 We signed a lease, replaced furniture, and installed our networking and IT infrastructure. We hung TVs, filled refrigerators with copious amounts of soda, and bought a water cooler. At the beginning of February 2020, we finally moved back into our own space. In March 2020, we sent everyone home for physical distancing. We’ve been there ever since. Thanks, COVID.

We came into 2020 expecting to reestablish our physical roots and collaborate in proximity to each other again. Instead, we found ourselves uniquely prepared to deal with an epidemic that pushed the entire world into unfamiliar territories and new work styles. An office explosion was a hard way to learn a new way to work and interact, but experience had taught us what the rest of the world was rushing to figure out—how to work together remotely and stay connected while apart. We had adapted, we had learned, so rather than resist and try to cling to our in-person activities… we simply… swam away. Perhaps in 2021, we’ll swim back again.

For more reflections on the vagaries of life, business and  technology, sign up for our Digital Frontlines blog